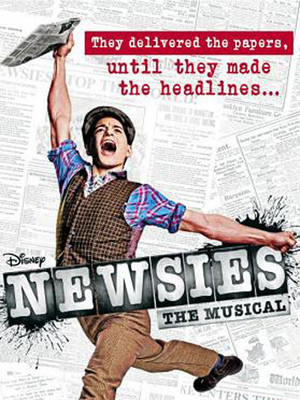 The perfect musical for our times

Read all about it!

Newsies is the blazing, high-kicking true story of New York's newsboys who made their living hawking papers, but in the face of rising prices and poor wages, started to make the headlines themselves! Based on Disney's 1992 film, which is in turn based on the newsboys strike of 1899 that brought the city to a standstill, this storming, energetic, adaptation is now heading out on tour.

After making its Broadway debut in 2012, the show, with book by Harvey Fierstien and Music by Alan Menken, Newsies went onto win 2 Tonys, including Best Score and Choreography, which was lavishly praised in the first rash of reviews, with the cartwheeling, flipping and pirouetting dance numbers declared 'Electrifying' by Vogue.

With classic Broadway flair, unforgettable songs (see 'Seize the Day' and 'King of New York') and a defiant tale of feisty kids making a difference, Newsies is a definite hit and a guaranteed crowd pleaser.

Reading between the lines, what is newsies about?

Orphaned and homeless, New York's newsboys live, urchin like, day by day, dreaming of a better life. In the meantime, the popular and charismatic Jack and friends have got more than just dodging juvenile detention centre on his mind. The newspaper editors are inflating their prices, meaning the newsies can't afford to sell them. Now is the time to pull together, create strength in numbers and protest! Join Jack on the adventure of his life as he finds the courage and the hope to change his destiny!

Newsies is a Family show, but please note, children under the age of four are not permitted in the theatre

Two hours and 15 minutes, including one intermission

Anonymous: “why you should see newes. ”

I saw newses in new yourk. and it was so good there was a lot of singing... more

Saw it on Broadway and was blown away by the tour. The production is the... more

Sound good to you? Share this page on social media and let your friends know about Newsies at Hippodrome Theatre.