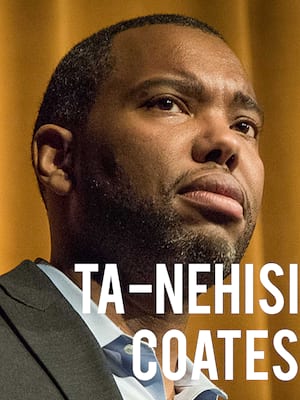 a work of both staggering imagination and rich historical significance.

Rolling Stone on "The Water Dancer"

Award-winning author and journalist Ta-Nehisi Coates heads out on an exclusive tour this fall as he presents his debut novel, "The Water Dancer". Held in high esteem by critics and book lovers alike, Coates is one of America's most exciting writers, garnering awards like the National Book Award and receiving a grant from the McArthur Fellowship.

First gaining attention for his work at The Atlantic Ta-Nehisi Coates left his audiences enthralled with his eloquent discussions about social, cultural and political issues. Releasing his memoir, "The Beautiful Struggle" in 2008 Coates popularity grew with fans eagerly awaiting his next book. It was 2015's "Between The World and Me" that threw Coates into national recognition. Stamped as one of The New York Times' Best Sellers and garnering the National Book Award "Between The World and Me" saw Coates is a bold literary exploration of America's racial history.

About The Water Dancer

Hiram Walker was born into slavery. But, when he is rescued from death by a strange magical power Hiram realizes he is called for a higher purpose. As he flees the lush and corrupt Virginian plantations Hiram unknowingly heads into the covert war on slavery. Now it's time for Hiram to master his gift and rescue, not only his fellow slaves but the family he left behind...

Sound good to you? Share this page on social media and let your friends know about Ta-Nehisi Coates at Meyerhoff Symphony Hall.