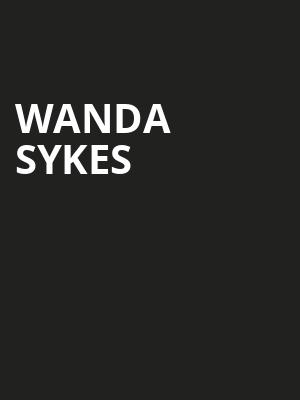 She earned the 1999 Emmy Award for her writing on The Chris Rock Show. In 2004 Entertainment Weekly named her as one of the 25 funniest people in America. She is well known for her role as Barbara Baran on The New Adventures of Old Christine and for her appearances on HBO's Curb Your Enthusiasm. In November 2009 The Wanda Sykes Show, her own late-night talk show, premiered on Fox, airing Saturday nights and ended April 2010.

Sykes also has a successful career in film, appearing as the motor-mouthed observer in Monster-in-Law, My Super Ex-Girlfriend, Evan Almighty, and License to Wed, and voiced characters in Over the Hedge, Barnyard, Brother Bear 2, Rio, and Ice Age: Continental Drift.

Sykes is also a keen LGBT rights activist and married her French wife partner Alex in 2008, with whom she has two children. In 2004 she authored "Yeah, I Said It", a humorous collection of essays touching on life, family, and current events.

Make sure you don't miss the hilarious Wandy Sykes on tour!

Photo by Tim Mossholder on Unsplash

Saw the show and I thought she was absolutely hilarious! At one point I... more

Sound good to you? Share this page on social media and let your friends know about Wanda Sykes at The Hall at Live Casino and Hotel.