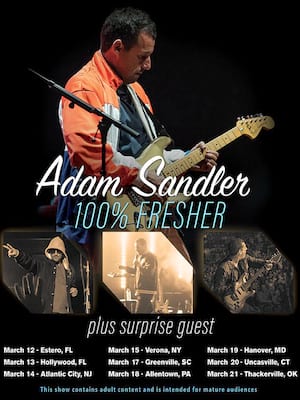 Indeed, Sandler is still as endearing and funny as ever.

Don't miss a rare live sighting of the one and only Adam Sandler as he dusts off his wry observations for a solo comedy tour that'll have you rolling in the aisles. A stalwart of the 90s comedy scene, Sandler rose through the ranks to become one of Hollywood's most prolific comedy actors and producers. He's sure to have a special guest or two up his sleeve, so expect a brim-filled show of comedy legends. If you're a fan of his Netflix special '100% Fresh' - then you don't want to miss out on this tour! Continuing on from the Netflix special, expect side-splitting comedy and songs along with extra material.

A former SNL cast member, Sandler first won over mainstream audiences with movies like the Wedding Singer and Happy Gilmore, solidifying his status as a Hollywood heavyweight with 50 First Dates, starring alongside Drew Barrymore. Nowadays, the comedian has returned to his stand-up roots, filling his live shows with musical gems and stories from his stellar career.

Please note that some venues are age restricted, please check with the venue before purchasing tickets.

Absolutely loved the show tonight. It was great to see some non liberal... more

Sound good to you? Share this page on social media and let your friends know about Adam Sandler at The Hall at Live Casino and Hotel.